KQED News on “Songs That Chargo Taught Us”

The Side Eyes/Redd Kross, ‘Songs that Chargo Taught Us’ split single

Remember the good ol’ days when rock and punk were about rejecting your parents’ ways, ideally really ticking them off in the process? Well, kids today …

Take 21-year-old Astrid McDonald, singer in the L.A. punkish band the Side Eyes. Not only isn’t she railing against her mom, but on the band’s new vinyl-only single she sings a song written by her mom. Well, her mom happens to be Charlotte Caffey of the Go-Go’s. And the song the Side Eyes does here, “Don’t Talk to Me,” dates from when mom was around the age her daughter is now, back in the late ’70s when Caffey fronted a pre-Go-Go’s trio with drummer D.J. Bonebrake (soon of X) and guitarist Joe Ramirez (Black Randy & the Metro Squad). The name of that band? The Eyes. Yeah, even young McDonald’s band’s name pays homage to mater.

What’s more, the other side of the single is by the veteran L.A. power-punk band Redd Kross, which as you may have already realized features McDonald’s dad, Jeff McDonald, as well as her uncle, Steven. And what’s more more, the song they do is also an old Caffey composition, “Screaming,” a rare one from the very earliest days of the Go-Go’s, notable for the stinging guitar and brusque energy that came to mark Caffey’s famous band’s best work.

Together the songs are presented as “Songs that Chargo Taught Us,” “Chargo” being Caffey’s nickname. Both are sharp, spirited performances, given more meaning for being a deeply loving appreciation to McDonald’s mom and spouse, respectively. It’s wonderful. But seriously, is this any way to have youthful rebellion?

ORDER THE SINGLE FROM IN THE RED RECORDS.

6. Redd Kross
Perhaps one of the most underrated and overlooked of South Bay punk bands is Redd Kross, which over the years evolved from hardcore punk to a more avant-garde, indie-rock form of alternative music. Hailing from the same city as The Beach Boys, Hawthorne, only a couple decades later (late ’70s), Redd Kross had a huge impact on L.A.’s early punk and later alternative and garage-rock scenes. Featuring brothers Jeff and Steve McDonald, the band has otherwise sported a revolving lineup of musicians; an early incarnation included guitarist Greg Hetson, who left to form Circle Jerks, and drummer Ron Reyes, who left to become the singer for Black Flag. The band’s first gig in 1980 was opening for Black Flag while they were teenagers. Redd Kross might not be the same band as when they started, but their influence looms large and they continue to perform and record to this day.

Noisey: Music by Vice: REDD KROSS AND SIDE EYES REMIND US HOW BADASS THE GO-GO’S ACTUALLY WERE

SoCal alt-rock legends Redd Kross have been snarling around for more than three decades, and now they’ve teamed up with the next generation for a split 7 inch with The Side Eyes, a punk outfit headed up by Astrid McDonald, daughter of Redd Kross frontman Jeff McDonald. The two bands’ new collaboration, Songs That Chargo Taught Us (out July 29 via In the Red), features covers of tracks penned by Go-Go’s great Charlotte Caffey. Caffey, a.k.a. “Chargo,” just so happens to be Jeff’s wife and Astrid’s mother, and we bet you feel pretty bad about whatever lame gift you last gave your mom right about now.

The tracks were produced by Jeff’s borther, Steve McDonald (Redd Kross, OFF!) at the Whiskey Kitchen in LA, making the release an all-around (super talented) family affair. Side A features The Side Eyes’ cutthroat rendition of “Don’t Talk To Me,” originally performed by Caffey’s pre-Go-Go’s punk outfit, The Eyes. “It has always been one of my favorite songs that absolutely deserved a resurrection. I love its simplicity, power, and sheer angst,” Astrid says, describing the song Caffey wrote at roughly the same age she is now, 21. “We had been covering [it] before the concept of the split 7 inch was devised. It went over so well at every show we played it. It really felt like we had brought new life to such a cool song so we knew we had to see that through. We had originally recorded it with Steve without a clear intention of what we were going to do with it.”

On Side B, Redd Kross rips through the Go-Go’s classic “Screaming”, a track “Redd Kross felt like they had wanted to cover all of these years,” Astrid says. “My dad always asks my mom if she remembers seeing him, the 6’5″ green-haired teenager standing in the front row of [the Go-Go’s] early shows…Redd Kross decided it would be a great way to honor my mom’s songwriting and kickassness if they recorded a punk song of hers.”

In The Red is over the moon to announce the release of this new split single by REDD KROSS and The SIDE EYES. REDD KROSS should need no introduction so we’ll just say that they are the finest purveyors of punk-glam-pop-metal in the world and one of the best band’s to come out of Los Angeles ever. Fronted by brothers Jeff and Steve McDonald, the band started out in the late 70’s LA punk scene when they were 12 and 15 years old! They’ve continued to record the entire time releasing one amazing record after another.

The Side Eyes are a brand new Los Angeles punk band fronted by Astrid McDonald, daughter of Jeff from Redd Kross and Charlotte Caffey (Go-Go’s). The Side Eyes are a ferocious young punk band whose sound recalls early punk bands like The Bags and Avengers and they play with a heaviness that would make Mudhoney or Fuzz proud. Their live shows are frantic, aggressive and incredible.

One this single both bands have recorded renditions of songs written by Charlotte “Chargo” Caffey back in her early punk rock days. The Side Eyes do “Don’t Talk To Me” originally recorded by Charlotte’s band The Eyes. Redd Kross tackle “Screaming” a very early Go-Go’s song. Both are incredible! You need this! 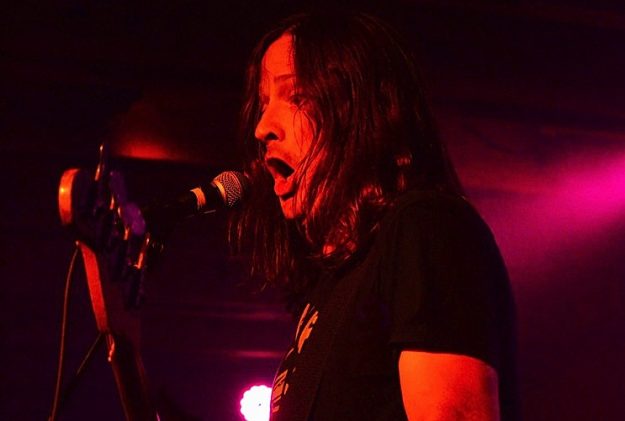 A conversation with Steven McDonald of Redd Kross, OFF! and now The Melvins is always a treat.

While the term elder statesman applies to McDonald, it seems inappropriate to use “elder” to describe anyone who brings so much youthful enthusiasm to his work. Especially in his latest endeavor, playing bass with the now L.A.-based sludge, grunge and experi-metal pioneers, The Melvins, who originally hailed from the Pacific Northwest.

Truth be told, McDonald, who turned 49 in May, seems to be very pleasantly pleased. When a legendary bass player joins a legendary band, the odds are in the fans’ favor of seeing something amazing at every gig, and this union doesn’t disappoint at all.

McDonald, who cut his teeth in the Hawthorne-based Tourists in 1978 (who would become Redd Kross in 1980) at the tender of age of 11, has a long line of music success under his belt. Along with his brother Jeff McDonald, he’s responsible for some of the best power-pop/punk hybrid music ever with his work in Redd Kross. In 2009, he formed punk-rock supergroup OFF! with Keith Morris (Circle Jerks), Dmitri Coats (Burning Brides), and Mario Rubalcaba (Rocket From the Crypt). In addition to his work with a bass in his hand, McDonald also has an ever-growing list of artists he is recording and producing, including The Format’s Sam Means, with whom he just did an absolutely killer record, Ten Songs.

What’s happening with Redd Kross and OFF!?
Well, my brother [Redd Kross’ Jeff McDonald] has been writing songs while I’m on the road with The Melvins. I’ve got a little recording space that I share with all the bands that I’m in. I call it the Whiskey Kitchen. I’m doing a couple records for Burger Records and In the Red Records at my space. My niece, Astrid McDonald, has a band called The Side Eyes. They’re totally rad. I’m making a record with them. My July is full with all the different balls I’m keeping the air.

With OFF!, we just had a conference call a little while ago. We’ve got plans to try and do some stuff in the coming year.