NME: Redd Kross: the eternal alt-rock underdogs on the dos and don’ts of surviving 40 years on rock ‘n’ roll’s sidelines 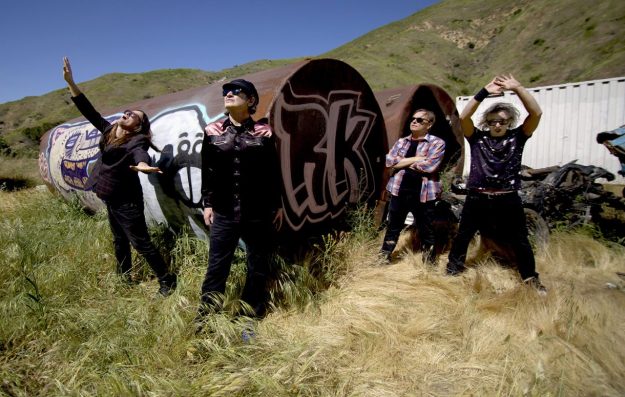 For almost four decades now, Redd Kross have been stalwarts of the alternative rock scene. Famed for their consistently ace – and really quite glam – indie rock, the band they started as children has persisted through punk, new wave, grunge, college rock and beyond. Sure, their peers in Sonic Youth, Nirvana, The Lemonheads, Dinosaur Jr. and all the rest, may have become household names (if your house is a pretty cool one at least). And yes, Redd Kross certainly haven’t. But they’re still here, making wild rock ‘n’ roll sounds, living the dream – and their stories are excellent.

Rock ‘n’ roll can be a treacherous and vicious place. Many have fallen. Many have failed. And so, who better than Steven McDonald, Redd Kross bass player, to give you some life lessons as to how you can have a 40-year career in rock…

DO… BE A LIFER

“I’ve been doing this band for four fifths of my life,” says Steven of the band he formed with his older brother Jeff, then 14, in Los Angeles back in 1978. “I started doing it when I was 11. It was everything to me. I took a nine-year break somewhere in the middle. That seemed to make sense at the time and so I spent nine years seeing what else was out in the world for me. But then I decided that I could happily be in Redd Kross for the rest of my life. I need to perform. That’s a big part of me. If I don’t perform I get weird.”

“I remember I was producing a Turbonegro record in Oslo. It was 2005 and I hadn’t been on tour for years. I went to the suicide capital of the world in suicide season. It got weird. At the time, the band were considering getting a third guitarist and I totally crossed this line as producer of offering to be in their band. They laughed, nervously. No-one was asking me to be in their band. It got super awkward. I just missed performing so much. That’s when I decided that I needed to get Redd Kross back together.”

DO… REMEMBER AGE IS JUST A NUMBER

Steven is fifty-two now. Could he see himself doing this when he’s 80? “Well, the Stones are still doing it. My dad is a precision welder, and he’s 80, and he’s still doing it because it’s what he does. I’d like to be still doing it. If you go by My Generation by The Who, and the mission statement of “I hope I die before I get old”, we’re supposed to be dying around about now anyway. Since we’re not, I guess we’re gonna have to work it out. Pete Townsend is still doing it. He has a nicer backstage area than I do, so I guess that helps, but still…”

DON’T… LET THE BITTERNESS CONSUME YOU

As we touched on previously, despite being consistently brilliant composers of hyper gooey, impeccably melodic glam-cum-indie rock for all of their career, Redd Kross never broke big like their peers. It’s not fair. But life isn’t fair.

“There’s bitterness there, if I’m being perfectly frank,” says Steven. “But I’m trying to chisel my disappointment into wisdom rather than bitterness.”

Can you hear a Nirvana song on the radio without wanting to smash the radio up?

“Well, Nirvana is a weird one,” he laughs. “I loved Nirvana. They don’t make me want to smash the radio up, but Nirvana might make me want to ring up my old manager and scream at him because we shared the same management. Once Nirvana took off, we couldn’t get them on the phone anymore. We couldn’t even get to open for them, which didn’t seem fair.”

Why do you think so many underground rock bands took off in that early ’90s and Redd Kross didn’t?

“Timing is one,” says Steven. “But I don’t have the algorithm. But then maybe it’s still lurking. The world has changed. I don’t want to sound like a deluded fool and I certainly know I’m not going to be sold to masses of teenagers at this point, but these days there’s not really an elite that control the gateway to the masses. I think we can genuinely do things on our own terms now. Which is super cool to me. I never really wanted to be a rockstar. I just wanted the ability to keep doing it.”

“I don’t know… I just heard something on a podcast about trying not to be so bitter recently, so I’m trying it out.”

DO… UPSET THE SQUARES

Not only were the band allegedly named after the scene in The Exorcist where a possessed Linda Blair masturbates with a crucifix (then named Red Cross, they added the ‘d’ and the ‘k’ when they were threatened with a lawsuit from the humanitarian organisation), they also covered the song Cease To Exist by Charles Manson – yes, that Charles Manson – on their first album.

“We just wanted to upset people,” says Steven. “Classic punk rock stuff. That said, we didn’t list it on the tracklisting of the first record, Born Innocent, because we were legitimately worried that some stragglers in the Manson Family would come and kill us. It was only just over a decade since all that stuff had gone down, so it didn’t feel too ridiculous at the time…”

“Actually,” says Steven, frantically, “I think the reason why we couldn’t support Nirvana was because Courtney Love said we’d been mean to her. Which is possible. We did prank call her once I think. We did that a lot, normally with our record label. We’d pretend to be members of [wretched hair-metal doozies] Poison and Stryper who were our label mates and try to get them in fights with each other. It didn’t work. We just got dropped from our record label instead.”

DO… LOVE THY BROTHER

Rock ‘n’ roll is full of siblings who are known for lamping the shit out of each other. Redd Kross are no different.

“We were never as bad as the Gallaghers,” laughs Steven of his relationship with brother Jeff, “but we would fight all the time in the early years – often onstage. We’ve always been close, but when it comes to responsibility within the band, it’s really easy for us to become bratty little kids again. That’s improved loads over time though. I’m really proud of that. There’s a song on the new record called ‘Beyond The Door’ that is the closest collaboration we’ve ever worked out between the two of us. I’m not sure we could have always done that.”

DON’T… BE AFRAID TO DREAM BIG

“I played my first ever live show supporting Black Flag,” says Steven. “I was 12. We were so tenacious at that age. We’d go through the phonebook and find the numbers of our favourite bands and just call them and ask if we could support them. We called X and The Dickies, and Black Flag were the first band who kind of bit. They invited us down to their rehearsal room and we watched them, and then they just handed us their instruments and said, ‘Go on then, show us what you can do’. I was hanging around with all these grown-up punk people when I was just a little kid. I got completely disowned by all the kids my age at school because I was talking about punk rock all the time. It was very strange.” 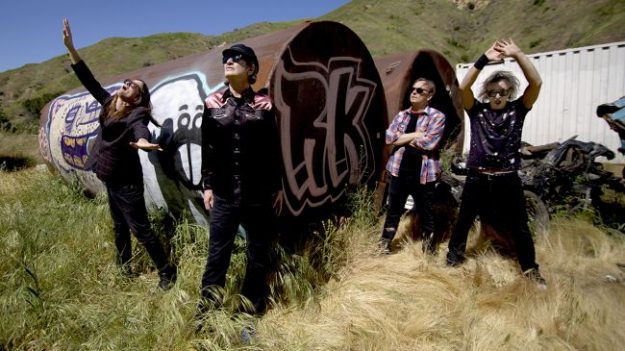 Redd Kross have released a stream of their new single The Party Underground exclusively with Louder.

The track has been taken from the Los Angeles outfit’s upcoming studio album Beyond The Door, which will launch on August 23 through Merge Records.

The song features a guest solo from Melvins’ vocalist and guitarist Buzz Osborne, with Redd Kross bassist Steven McDonald explaining: “I wanted to hear three of my favourite guitarists and collaborators – Buzz Osborne, Jason Shapiro and Jeff McDonald – trade off solos while we celebrated the finer things deep in the bowels of the underground, expressing gratitude for a life lived in the cultural petri-dish of the world, the world of underground culture.

“I’ve been playing nightclubs since 1979 and I was 12, and it was time for me to talk up the wonders down here. The best stuff will always come up from the bottom. It’s the Party Underground.”

Beyond The Door is said to be inspired by the band’s “total commitment to having the best fucking time we can have while we’re all still here,” with Steven reporting it’s his and brother Jeff McDonald most collaborative record to date.

He says: “Jeff is still very much the driving force behind the compositions, but with more help from me than ever. Jeff and I haven’t shared this much of the writing and singing since Born Innocent in 1981.”

Redd Kross will hook up with Melvins in September for an extensive US tour, while Beyond The Door is now available to pre-order from Merge Records.